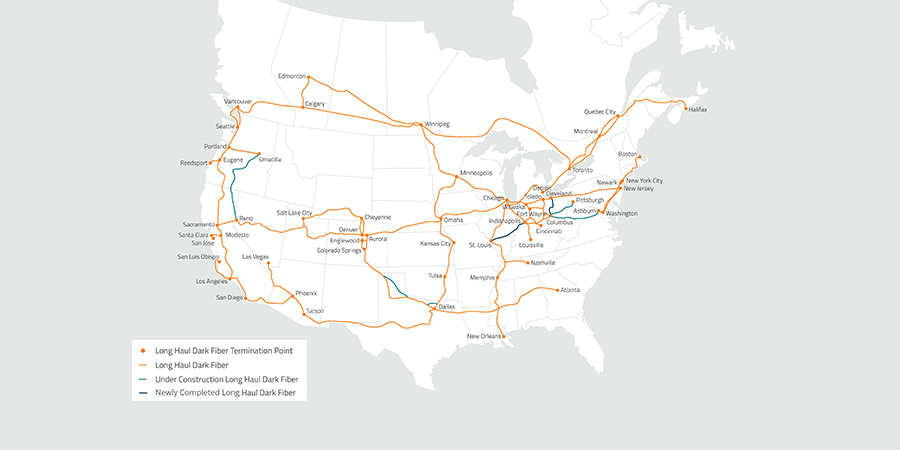 “Zayo is committed to supporting the needs of our customers, not only for today, but for the innovations of tomorrow,” said Bill Long, chief product officer at Zayo. “Zayo is one of the only national providers actively pursuing new fiber builds, which have been enabled through our extensive existing infrastructure footprint, expertise within our teams, and the agile business structure Zayo has worked to build over the last 15 years. The continued expansion of our dark fiber and wave routes provides our customers with the customization and scaling ability they need to accelerate their digital transformation journeys.”

In addition to the new dark fiber routes, Zayo has overbuilt the following route with new fiber capacity:

The new long-haul dark fiber routes provide customers with diverse routing options and the ability to customize and enhance their network to meet the unique needs of their businesses while maximizing resiliency and ability to scale. These new routes are entirely underground, which provides the highest level of security and redundancy.

Leading the Industry in 400G

Zayo continues to lead the industry in 400G, adding 18 new 400G enabled routes in the second half of 2022 to provide high-bandwidth options between key cities, including:

The new 400G routes will allow customers to continue scaling their bandwidth with Zayo on existing routes, opening up high-capacity access on new routes, improving network stability and providing an overall better customer experience through quicker delivery and optimal routing. The enhanced capacity from these routes will support customers that have exponential growth needs driven by emerging technologies such as 5G, cloud adoption, IoT, AI, edge computing, and automation.

Zayo’s newest completed Transpacific subsea route connecting Hillsboro, Oregon, to Tokyo utilizing the TGN-P cable marks the third Transpacific route for Zayo, in addition to its existing capabilities on PC-1 and Unity. The route provides a diverse option to PC-1 for a Transpacific cable landing in the U.S. Pacific Northwest and also includes a diverse landing station in Tokyo. The route is available with pre-provisioned and pre-tested 10G Waves circuits and is managed by Zayo’s network operation center (NOC) for enhanced customer service.

This series of expansions from Zayo marks the latest in the company’s $250 million investment into its global infrastructure this year. Most recently, the company expanded its infrastructure and Tier 1 IP network into the key border cities of McAllen and Laredo, Texas, with two new 100G IP points of presence (PoPs) and 400G Wavelengths capabilities. In May, Zayo announced its largest organic network expansion to date. Celebrating its 15 year anniversary this year, Zayo’s footprint now spans 16 million fiber miles and 137,000 route miles.