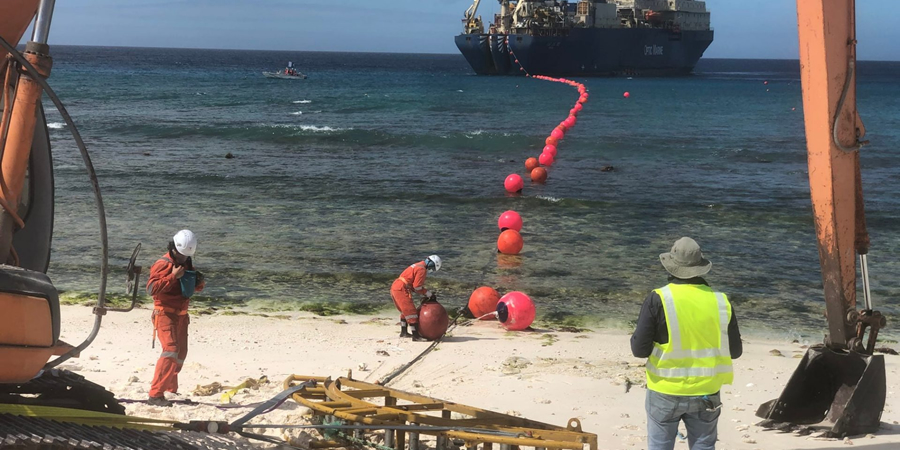 Telstra launched the first direct subsea cable to connect Australia with the U.S. will be ready for service in July 2022. The Southern Cross NEXT cable (SX NEXT) will enhance connectivity between Australia and New Zealand and the U.S., with branching units to Fiji, Kiribati, and Tokelau. Telstra is a 25 percent shareholder of the Southern Cross Cables Network (SCCN), the owner of SX NEXT.

SX NEXT will be the first single span express cable, and the first direct cable, to connect Australia to the U.S., making it the shortest subsea route. It is also the only cable that has landing stations in Tokelau and Kiribati in the Pacific Islands. SX NEXT has a four-fiber pair cable system capable of transporting 72Tbps, a remarkable addition to the current bandwidth and connectivity options linking Australia and the South Pacific Islands to the United States. The cable is built using up to 400G Dense Wavelength Division Multiplexing (DWDM) technology and purpose-built landing stations, which will deliver high-speed connectivity and low latency between countries, as well as a resilient network infrastructure for the Pacific region.

When SX NEXT launches, it will lead to a major improvement in internet quality and internet penetration across the Oceania. Allowing different data streams to be sent simultaneously over a single optical fiber network will enable a higher data transfer rate and optimize network investment. As a result, the faster connectivity, stability and resiliency provided by SX NEXT will help accelerate digital transformation for businesses across the region.

There are 12 international submarine cables connecting Australia to the rest of the world, and the SX NEXT cable will be the third cable in the SCCN ecosystem. The SX NEXT cable is among the largest single submarine cable infrastructure projects in the world which spans approximately 15,857 kilometers along the sea floor. SX NEXT complements the existing Southern Cross and Endeavor-AAG cable systems in connecting Australia and the United States. The redundancy of the Southern Cross cables with SCCN creates seamless, efficient paths from Australia into Asia-Pacific, the U.S., and beyond.

Oliver Camplin-Warner, Telstra International CEO said Telstra was delighted to have partnered with SCCN to launch the new subsea cable SX NEXT.

“With the rise of cloud-based services and hybrid remote working models, connectivity with diversity and reliability is more critical than ever to ensure constant uptime and uninterrupted services. We will continue to innovate on our network infrastructure and work with our industry partners on providing more accessible, faster and more stable connectivity to our customers, enabling them to connect with the rest of the world.

“The SX NEXT cable will strengthen Telstra’s existing subsea network infrastructure – one of the largest in the Asia-Pacific region – and solidify our commitment to connecting people and communities from Australia and the Pacific Islands to the U.S. and around the world.”