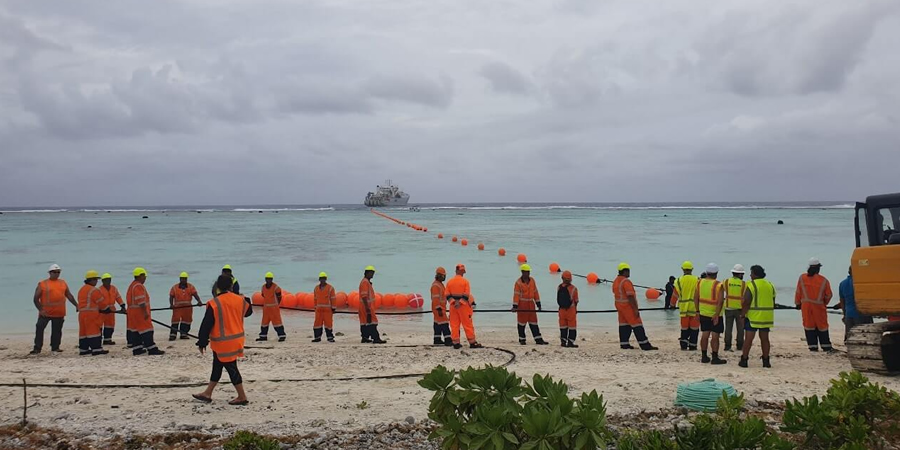 Google will build an open subsea cable system that will stretch from the east coast of the United States to Argentina to help improve access to its services, including Google Cloud, for customers in South America.

The “Firmina” subsea cable will be the world’s longest that’s capable of running entirely from a single power source at one end of the cable if its other power sources become temporarily unavailable, the Mountain View, Calif., technology giant said.

That single-end power source capability will equate to a “resilience boost at a time when reliable connectivity is more important than ever,” according to Bikash Koley, vice president of global networking for Google Cloud.

A Google spokesperson said the company currently is looking into various landing site options on the East Coast to optimize routing of the cable. The spokesperson declined to name those options, citing negotiations that are under way.

The cable will run to Las Toninas, Argentina, with additional landings in Praia Grande, Brazil, and Punta del Este, Uruguay.

“With 12 fiber pairs, the cable will carry traffic quickly and securely between North and South America, giving users fast, low-latency access to Google products such as Search, Gmail and YouTube, as well as Google Cloud services,” Koley said in a blog post today announcing the cable.

Data travels as pulses of lights inside submarine cables’ optical fibers, and that light signal is amplified every 100 kilometers with a high-voltage electrical current supplied at landing stations in each country, Koley explained.

“While shorter cable systems can enjoy the higher availability of power feeding from a single end, longer cables with large fiber-pair counts make this harder to do,” he said. “Firmina breaks this barrier. Connecting North to South America, the cable will be the longest ever to feature single-end power feeding capability. Achieving this record-breaking, highly resilient design is accomplished by supplying the cable with a voltage 20 percent higher than with previous systems.”

The Firmina cable will leverage the 18-kilovolt power technology of Newington, N.H.-based SubCom, which has the contract to design, manufacture and deploy the undersea cable. The cable and equipment will be manufactured at SubCom’s campus this year through early 2022, with main lay installation operations scheduled for the summer of 2022. The system is expected to be ready for service by the end of 2023, according to SubCom.

The new cable is named after the late Maria Firmina dos Reis, a Brazilian abolitionist and author who died in 1917.

Google already owns subsea cables in South America. Its Junior cable, which became operational in 2018, connects Rio de Janeiro, Brazil, to Santos, Brazil; and its Curie cable, which became ready for service in late 2019, connects Los Angeles to Valparaiso, Chile. Google also has the Monet cable system that links Boca Raton, Fla., with Fortaleza and Santos, Brazil (owned with Brazil’s Algar Telecom, Uruguay’s Antel and Angola’s Angola Cables); and the Tannat cable system (owned with Antel) that connects Uruguay, Brazil and Argentina and can interconnect with the Monet cable system to Boca Raton and the Junior cable system to Rio.

Google has a data center in Quilicura, Chile, near the capital city of Santiago, while Google Cloud has a three-zone cloud region in Sao Paolo, Brazil, that became fully operational in 2015 and in December announced plans to build another in Santiago.

Google now has invested in 16 subsea cables in total, according to the company. Others include Dunant, which connects the United States and mainland Europe, running between Virginia Beach, Va., and Saint-Hilaire-de-Riez, France (Google announced it was ready for service in February); Equiano, which will connect Africa with Europe (the first phase of the project, connecting South Africa with Portugal, is expected to be completed this year); and Grace Hopper, which will link the United States, United Kingdom and Spain and is expected to be completed in 2022.