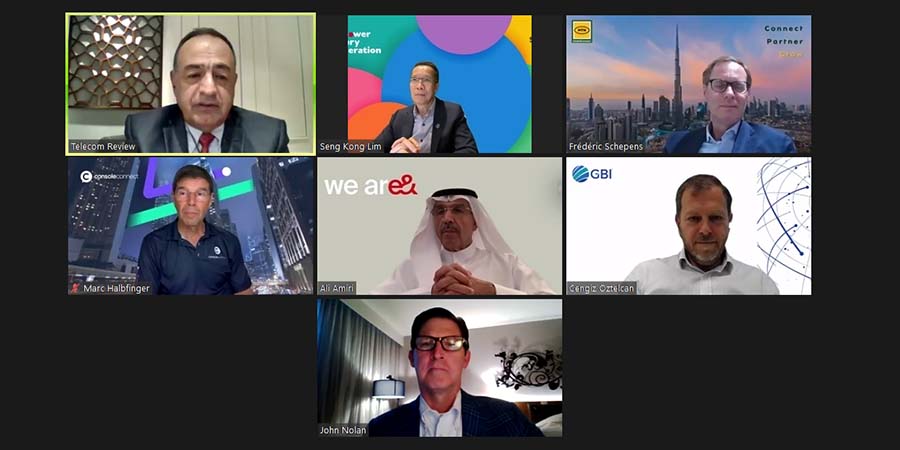 The importance of the wholesale business has been put under the spotlight as capacity demands increase. Industry leaders convened to discuss the role of the wholesale and capacity industry and if it’s gaining more ground in the digital era.

Halbfinger said, “I think that we’re seeing a huge demand for subsea, terrestrial, and RF capacity.” This demand is said to be driven by a few areas such as the advent of 5G in the mobile layer, the dramatic influence of cloud computing and virtualization, and the expectation that bandwidth itself will continue to expand.

Metaverse has been a recent buzzword that could also impact the bandwidth capacity and latency demands, coupled with the large number of cloud ecosystems taking hold as a component for digital transformation.

“There is a demand for more digital infrastructure at the data center level which feeds the capacities, requiring more power, and demand for connectivity inside and outside jurisdictions, domestically and internationally. These are all designed to feed the continuing spectrum of ICT evolution,” explained Halbfinger.

Be of the same mind, Seng Kong Lim, Managing Director, Singtel Enterprise Business stipulated the exponential growth of capacity moving forward. But the point he raised is that with this demand, who will be providing the supply. Due to the presence of other players like OTT, “the role of telcos is impacted as one of the big roles for us to play is capacity planning.” But with different parties come different motivations.

As telcos’ role diminishes, repositioning is important. Considering the supply in the market, telcos still need to play their role to ensure that “traffic goes to the right places and customers are well served.”

Frédéric Schepens, CEO, MTN GlobalConnect briefly gave a preview of how the company is carving out its fiber infrastructure and data centers. Focused mainly on the African region, the role that they are playing is part of their Ambition 2025. “We really look at how we can fast track and leapfrog the digitization program in the continent,” expressed Schepens.

The latency is still a major issue, Schepens added, which is why submarine cables are booted up around the continent. More so, the highways of tomorrow — digital railroads — are being built from east to west, aiming to reduce the latency from 150 ms to 20-40 ms.

“This is what we actually need in order to set up a digital environment,” highlighted Schepens. In line with this, MTN GlobalConnect has opened up its proprietary networks of over 85,000 km of fiber in the ground to anyone who wants to use it in a neutral way.

Global companies are known to have entered Africa, generating more content, while online gaming is also on the rise. Having said that, “The demand is actually getting bigger and bigger and as an industry player, it’s our duty to continue that journey. We at MTN firmly believe that everybody deserves a digitally connected life,” Schepens articulated.

Following the trail of the conversation, John Nolan, Vice President – Global Connections & Alliance Management, AT&T mentioned that “applications and companies that are driving closer to the edge don’t mean a lot unless there’s connectivity to the end-users.”

Nowadays, when you lose connectivity, it’s like you’ve lost oxygen. Everybody has gotten accustomed to bandwidth and connectivity.

With this in mind, the unique role that wholesale business plays is selling that capacity as an anchor tenant in a build. “Wholesale is a critical component for all of us to continue investing at record levels and be able to ultimately serve our customers,” Nolan remarked.

For Cengiz Oztelcan, CEO, GBI, the wholesale business industry is still playing the same role they’re at since decades ago. “It was always crucial; it was always important but the awareness was not there.”

Today, more and more people across the telecom and IT industry realize the importance of wholesale business. But being put under the spotlight is a double-edged sword. “It gives us a lot of pride in the work we do yet also gives a bit more pressure on the industry, especially for technicians and leaders like ourselves,” Oztelcan commented.

Helping consumers as well as enterprises to thrive is a continuous process that keeps on growing, affected by new inventions. “The underlying fact is we’ve always been there and we will always be there.”

On the other hand, Ali Amiri, Group Chief Carrier & Wholesale Officer, e& laid out that the wholesale business as an industry is somehow seen as a black box, and that during the pandemic, “wholesalers are enablers of all the digital players.”

Without a doubt, enterprises, consumers, and hyperscalers now rely more on better connectivity with low latency. “Our role has not changed much in terms of bringing the best and seamless connectivity, but enabling digital cloudification couldn’t have been possible without the wholesalers.”

Whatever industry it is, the whole world is depending on the wholesale business for the right kind of capacity — whether subsea or terrestrial — it will offer.

Then the moderator asked about why we’re seeing now subsea cable systems moving into an upward trend.

Marc Halbfinger said that the driver for subsea capacity growth is undoubtedly the cloud and its applications with the need for storing and computing to bring connectivity to the end-users. However, he said that in several years, some in the wholesale industry have looked at subsea capacity as an area that facilitates the sector’s retail businesses. He argued that it also represents a source of revenue and profit in the industry.

“In the last seven or eight years, some of the western clouds have viewed subsea capacity solely as a cost, and what we've seen is a push-down in the actual price per unit as the trajectory of value has shifted for some of the user bases of subsea. A large amount of the construction of subsea that has come about in that period has been driven directly by the clouds and not using the traditional licensed service providers as intermediaries.”

Cengiz Oztelcan said that GBI is a company that solely invests in submarine systems and networks and regarded it as a Capex heavy industry and a “difficult business to be in.” He felt that despite the challenges, many new players have come into the business in the last 10 years and that there was a tremendous upward trend with multiple new projects in execution or planning phases in every region.

On the demand side, he said hyperscalers are part of the subsea segment. “Subsea capacity gives the ICT and telcos the power to compete. Telcos in any part of the world may be connected to a beautifully crafted and designed system of subsea to the data centers, cloud, and content players so that they can compete with any other telcos in the world,” he said.

Another area of discussion during the panel was how the wholesale industry can contribute to business growth.

John Nolan said that AT&T is laser-focused on providing the best connectivity in fiber or wireless for their global customers and without the wholesale industry it cannot serve those customers profitably. He said that the combination of cost-effectiveness, competition, and quality in the wholesale industry contribute to the overall business growth.

Ali Amiri said apart from the core wholesale business, today, it is the enabler of all the cloudification and digital projects for enterprises and customers.

“The gap between enterprise, customers, and wholesale is also diminishing.” He pointed out that apart from the traditional services of voice, messaging, roaming, wholesale is also responsible for generating new business growth through customer experience, cost-saving, etc.

Lim Seng felt that there was no need to worry about growth. He said that there are so many things going on and data flow is going to explode. “5G, metaverse, autonomous vehicles, drones, smart manufacturing, etc. are pointing toward a huge exchange of data.” He highlighted that the lack of a supply line should not be a bottleneck for growth. “This is something that we should think long and hard about.”

Recently, the number of data centers has tremendously increased, including in the Middle East. Toni Eid, the panel’s moderator, asked the panelists about their opinion on why has the number increased lately.

Frédéric Schepens said that from the sub-Saharan context, MTN GlobalConnect has around 65 data centers in 20 countries and is looking further to fine-tune that presence by 2025 through joint ventures and partnerships.

Ali Amiri said only data centers can accommodate the huge demand of data traffic flow generated as a result of cloudification and digitalization. In the MENA, we see a lot of data centers availability and plans for the future as well.

Finally, the panelists concluded the discussion by tackling the improvements they recommend for the wholesale sector in their regions.

According to Cengiz Oztelcan, CEO, GBI, content is driving the demand, thus drives the need for capacity and the exploding number of data centers in the region. “Single-handedly regulatory frameworks can isolate a company from a country from being part of this journey, so every single country should try to look at the regulatory framework.”

On this note, John Nolan commented, “My belief is that the wholesale industry hasn't moved fast enough to transform our business and some of the work that's currently underway is helping to rectify with the Math APIs”.

“Against that desire, investment bankers’ analyst management consultants, and even boards of directors in the companies are pushing for segregation of the wholesale industry, and that can be the data center infrastructure. Unfortunately, although as a network service provider, it's not just building physical infrastructure, we also need to be aggressive in building software, code, and understanding that in today's world code solves problems more than hardware and capital.”

Moreover, Singtel Enterprise Business’ Managing Director, said that Asia is a very diverse region and has a different culture regulation. Digitalization, capacity, AI will have a huge impact on economic development. Asia doesn’t have enough collaboration to help increase coverage of cables, because the landings are usually in few locations and many countries are being left out. It's because of their own regulations or the country's politics. Collaborations, whether between the regulators or the industry players, can help improve the coverage of cables in every country in Asia.

Ali Amiri, Chief Carrier & Wholesale Officer, e&, also commented on this topic, “the wholesalers have to work to improve going from legacy to the new areas, and to balance the growth that they've been adding to their individual companies”.

Frédéric Schepens concluded that interoperability has always been one of the keys and hurdles in growing GDP economies, and the well-being of this planet, and as a community.  The second issue is phasing of technologies, which is not always well-aligned. “I’m still running with a lot of 2G/3G networks and we've just barely started on 5G in certain markets, which means that customers won't be able, in certain cases, to operate as they should be in various countries.”