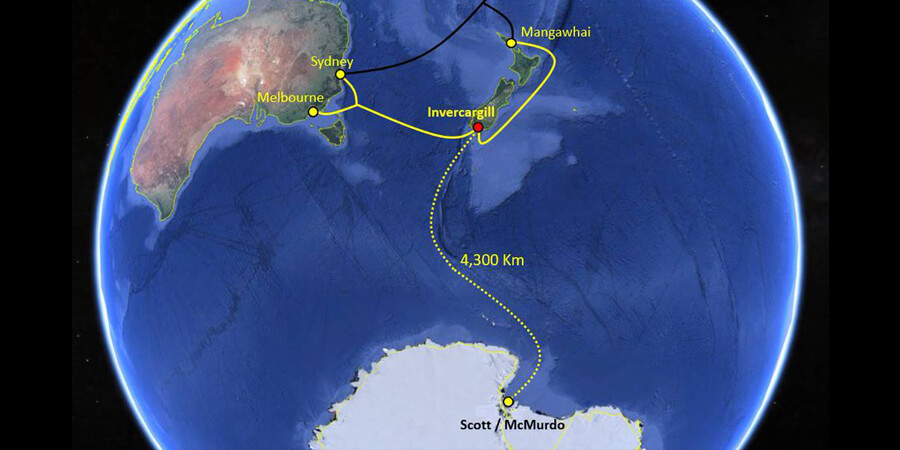 Connectivity between Australia and New Zealand could receive a further capacity boost after plans for a new data center build and cable system were revealed today.

A cable system connecting New Zealand's southernmost city of Invercargill with Sydney and Melbourne is part of a US$500 million (A$663.5 million) project by to build a 60-megawatt, 25,000 square meter hyperscale data center called Datagrid.

The cable system will connect to the Hawaiki circuit in Mangawhai in the North Island for onward international connectivity.

Depending on demand and additional funding, a 4300-kilometer extension to the cable from Invercargill to the McMurdo Station in Antarctica is possible.

Trans-Tasman latency for the new cable system is expected to be around 24 milliseconds, as Invercargill is closer to Australia than New Zealand's largest city of Auckland.

The location for Datagrid is Makarewa, near Invercargill, with the capacity to scale up to 100 MW and 40,000 square meters of space.

Seeking to capitalize on renewable power that's said to be 15 percent cheaper than in Australia - home to all the region's hyperscale data centers currently, the Datagrid project is driven by Hawaiki Cable founder Remi Galasso and telco veteran Malcom Dick.

With the latency being well below the 35 ms threshold considered as an acceptable delay in the cloud industry, Galasso said the new data center and cables target a serviceable market of 20 million people in Victoria, New South Wales, parts of Queensland and New Zealand.

Datagrid has teamed up with power generator Meridian Energy to build the cables and data center.

Meridian Energy is majority-owned by the New Zealand government, and the fourth largest electricity retailer in the country.

It has power generation facilities on both sides of the Tasman, which includes two wind farms in South Australia and Victoria, and seven hydro-electric dams in New Zealand.

Meridian is one three major power companies in New Zealand to generate all power from renewable resources only.

Guy Waipara, Meridian's general manager for generation and natural resources, said the data center project will be able to use the large amount of hydro-generated power freed up after the Tiwai Point aluminum smelter, owned by Rio Tinto and Sumitomo, closes in August 2021.

The cable will go from Oreti Beach in Invercargill and land at Coogee in Sydney and St Andrew in Melbourne.

The cable itself is designed to have four fiber pairs on the Invercargill to Sydney leg. Between Sydney and Melbourne, the cable will have 16 fiber pairs, and 13 ms latency.

Galasso said the cable system is expected to enter service in 2023.