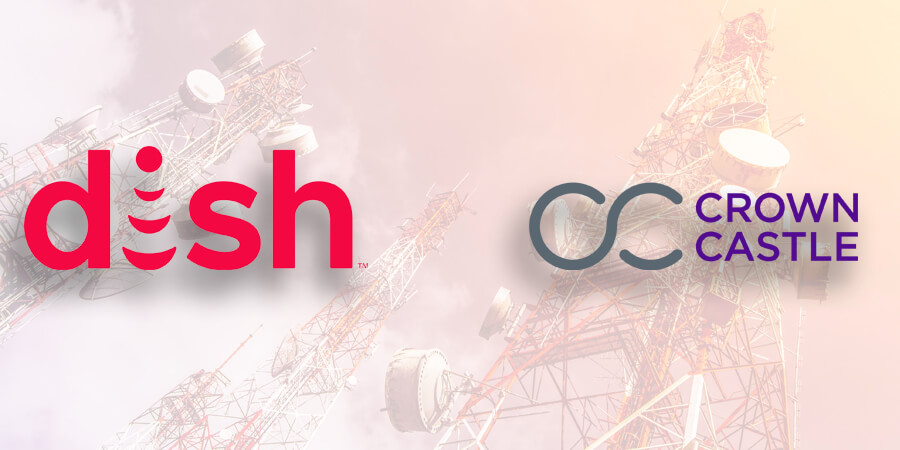 DISH and Crown Castle has a long-term agreement through which Crown Castle will lease DISH space on up to 20,000 communication towers. As part of the agreement,
DISH will receive certain fiber transport services and also have the option to utilize Crown Castle for pre-construction services. The agreement encompasses leases on towers located nationwide, helping DISH facilitate its buildout of the first open, standalone and virtualized 5G network in the U.S.

Dish’s plan for a nationwide 5G network greenfield build is something that the U.S. hasn’t seen for at least a decade or more,

This is the first tower deal Dish has signed with one of the big three public tower companies as part of its commitment to be a fourth facilities-based nationwide wireless carrier. Dish’s greenfield wireless build plans call for a cloud-native standalone 5G network and an open radio access network (RAN) architecture. Crown Castle is the first infrastructure partnership DISH has announced.

Public tower companies including Crown Castle and peers American Tower and SBA Communications have had their eyes on the potential impacts from Dish’s greenfield wireless build down the line.

"The announcement of Crown Castle as our first tower partner marks an important milestone for DISH as we set our sights on building a first of its kind 5G network in the U.S.," said Dave Mayo, DISH Executive Vice President of Network Development. "Crown Castle brings the experience and broad tower portfolio we need, from major markets to more rural areas, to help DISH bring to life the promise of our standalone, nationwide 5G network."

As for value estimates from channel checks suggest Dish could pay $1,500 per tower per month (slightly lower for private tower cos and higher for public ones), equating to roughly $360 million annualized revenue opportunity for Crown Castle for 20,000 towers, not including fiber and network services. Still, they cautioned the actual number of towers “is likely to be less and roll in over multiple years.”

Crown Castle’s portfolio is more focused on urban areas, with higher populations where Dish is likely to build initially in order to meet population coverage targets. Crown also has its fiber transport business which Dish will need to connect sites and handle data.

"We are excited to establish this long-term strategic relationship with DISH, and we look forward to supporting their nationwide 5G network deployment for years to come," stated Jay Brown, Crown Castle's Chief Executive Officer. "DISH's 5G network buildout marks an important development for the industry, and we believe our ability to offer towers, small cells and fiber solutions at scale provides us the best opportunity to deliver value as we support their wireless infrastructure needs.

“CCI accounts for 30% of the US tower market, which could suggest that Dish intends to build to 65,000 towers if Dish’s network build is evenly distributed across the tower companies,” wrote New Street analyst Spencer Kurn. That would be more than the 50,000 New Street had assumed for the early phase, the team noted, “so all of the Towers are likely better off than we initially expected.”

Cowen, meanwhile, thinks it's slightly negative for American Tower and SBA “given the potential size of the CCI deal when taking into consideration DISH’s limited needs the next few years.”

Stephen Bye, Dish EVP and chief commercial officer, said during Q3 earnings that Dish was on track to meet its stated target of at least 15,000 sites to hit its minimum buildout coverage requirement for June 2023. Dish is aiming to cover 70% of the U.S. population by mid-2023.

MoffettNathanson analysts last week cited more sites located to serve urban markets as one reason Crown Castle also could be the first of its peers to see activity from C-band spectrum deployments once those get going. The C-band auction kicked off December 8 and had generated around $2.55 billion in gross proceeds as of day two.

The rationale for Dish is that it’s expected to focus first on addressing dense areas where more people are. Dish needs to meet FCC buildout deadlines, including covering 50% of the U.S. population by June 2023 for some spectrum licenses.